Unless you live in northern New Jersey, you probably don’t read The Hackensack Record. And you certainly don’t give a damn about the raging controversy there between the county and the sheriff.

But indulge me for two minutes while I bury the lede…

I have no clue what the hell is going on here, but it seems like some fine local reporting by reporter John Ensslin – who’s also president of the Society of Professional Journalists, the nation’s largest (nearly 8,000 members) and oldest (more than 100 years) journalism organization.

So here’s what bugs me…

While Ensslin was churning out almost hourly updates about a local cop squabble, SPJ was on its third day of ignoring a national free-press fight that was covered by the likes of The New York Times and Fox News.

On the very same day Ensslin was mired in Hackensack hyperbole, only one of SPJ’s 25 blogs – yup, there are 25 of ’em – mentioned the student editors at the University of Georgia walking off their jobs to protest censorship.

That one blog was mine – until Ensslin ordered me to take it down.

So why is it OK for Ensslin to follow a story for his readers, but it isn’t OK for SPJ to even mention a story to its members?

Because SPJ’s leaders don’t follow their own rules when the news is about their own kind. 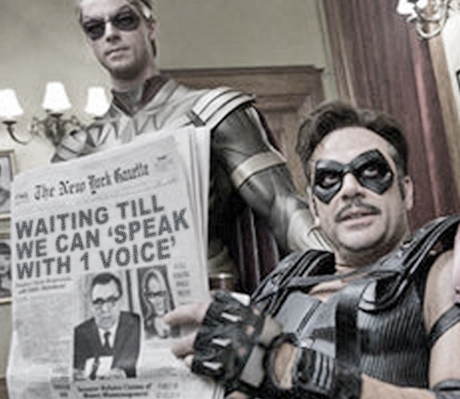 Let’s break news about ourselves.

The walkout – and fallout – from The Red and Black keenly illustrates how SPJ leaders are good people with old ideas.

Ensslin just this afternoon emailed his “president’s letter” to The Red and Black’s board – two days after the board and the students issued a “last statement” that resolves everything, from prior review to a lack of students on the board.

(When I told one highly regarded SPJer that Ensslin was just releasing his letter, he deadpanned, “Tell him if he hurries, he can still telegraph the Titanic to look out for the iceberg.”)

But as of 6:15 this evening, you can’t read that letter. Because it’s not posted online.

I emailed Ensslin this afternoon to ask if he had sent the damn thing. He replied, “I believe the staff emailed it to the chairman of the Board and the paper’s editor-in-chief today.”

Surprised, I asked where it was on the SPJ website. He hasn’t replied yet. But I checked the SPJ homepage, the SPJ president’s blog, and SPJ’s latest membership newsletter, called Leads. Nada.

I had to take down my post so the president could write a letter no one else knows about?

I was, however, lucky enough to see the letter myself. Ensslin sent me a draft two days ago and asked what I thought. I said it was just fine. (Hint: send it out now.)

Ensslin closed the letter with, “Please be advised that SPJ will continue to monitor this situation closely. If we can be of any assistance, do not hesitate to ask.”

Assistance? Let’s review what assistance SPJ has provided so far. A day after The Red and Black staff walked out, SPJ tweeted…

…and that’s it, until I wrote something for a blog I run as an SPJ national board member. The post announced I was sending someone to Athens, Ga., to investigate.

How could I do that? Because SPJ’s board has members who represent regions of the country, and mine covers the southeast United States. So I paid the travel expenses of a journalist I trust, and she recorded interviews, shot photos and video, and uploaded everything to Dropbox so I could post a report Friday night.

Early Saturday morning, Ensslin asked me to take it down, with the implicit threat he’d do it if I didn’t.

Since I was still groggy when Ensslin called me, I asked him for more detailed comments three days ago. He has yet to get back to me. (“Watch out, Titanic…”)

But Ensslin did copy me on an email to other SPJers, replying to their questions about the same. One of them posted a version online. That seems as close to an official statement as I’m gonna get.

So let’s break it down. 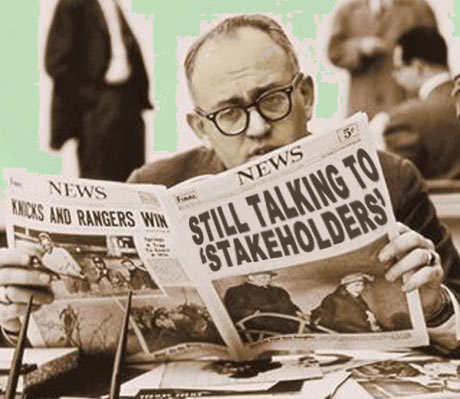 ENSSLIN: “My practice as SPJ president has been to do a fair amount of due diligence and fact gathering before writing a letter that states the Society’s concerns or outrage. Call me old school, but it’s no different that when I write a story for The Record. I interview as many of the stakeholders as possible and then write the story.”

Except when he doesn’t. See the top of this post.

If Ensslin had covered this story the way the SPJ has covered The Red and Black, he would’ve waited till today to write something. And he probably would’ve been fired yesterday.

ENSSLIN: “By posting to an SPJ hosted blog, it would be easy for readers to mistake Michael’s opinions as a statement of SPJ’s position in the matter.”

But let’s say they don’t.

Then why didn’t Ensslin give the same take-down order to Long Live the Red & Dead, posted on yet another SPJ blog on Monday?

And just last month, a fellow regional director took a stand on an issue more wide-ranging than the one I commented on…

“As regional director for the Society of Professional Journalists, the nation’s most broad-based journalism organization, I fully support adopting Rule 04-0401.01, which would allow electronic media coverage of court proceedings….I respectfully urge the judicial council to adopt these rules.”

Did anyone find that confusing?

ENSSLIN: “Michael already has come under criticism for not attempting to at least interview some of the stakeholders in this case before reaching his conclusions.”

That’s true. Some SPJers demanded I wait until everyone comments – even those folks who refused to comment. But again, we don’t do that in our own journalism. The Red and Black board and management refused to comment to The New York Times. It still ran the story.

Besides, when I read Ensslin’s letter, I didn’t note any facts that contradicted those I reported last Friday. And I didn’t see any evidence that Ensslin had spoken with any “stakeholders” I had missed.

So what did SPJ gain by waiting five days to write a one-page letter?

ENSSLIN: “I felt it was important for SPJ to speak with one voice when addressing a troubling incident….This is not a new practice with me. It’s been a tradition among previous SPJ presidents as well.”

I don’t want to change tradition. I just want to add to it.

When I first joined SPJ in 1985, the only way its leaders could express outrage was to mail a letter to the idiots messing with the press, then send copies to newsrooms across the country.

Today, most SPJ board members have blogs – and no clue what to do with them. There are no rules, no suggestions, and no marketing. A weapon of mass instruction collects dust.

Imagine if SPJ is a historic house in Colonial Williamsburg (which I think is exactly how some SPJers view the place). I don’t want to tear it down and build a Walmart. I just want to run some wifi into the family room.

Let’s be as brave as our sources.

So I’ve burned a lot of kilobytes about an apparently trifling topic.

“When you told me that SPJ was sending someone to Athens, I called the attention of the whole room and told them the news,” Red and Black multimedia editor Lindsey Cook emailed me last weekend. “Immediate cheers and high fives broke out. It meant a lot to our staff to have a member from SPJ there.”

Sunday night, I called University of Georgia journalism professor Barry Hollander. Maybe it was the adult beverage he was sipping after dinner, but he passionately told me…

“The students felt pretty much alone at first, and they needed to know they were getting support from professional journalism organizations – during the game, not after the whistle has blown.”

You don’t really know who your friends are until bad things happen. Here are three easy ways for SPJ to be the good guy during other people’s bad times…

If SPJ isn’t ready to render a verdict, it can still aggregate the pithiest news and opinions on the topic for its interested members. Twitter is the perfect way to do that – it takes little time to write and read. “Journalists are big Twitter users, and students are huge users,” Hollander says. Instead, we got four SPJ tweets about The Red and Black in six days.

2. Blogs are better than letters

Instead of keeping a lid on debate, blow the lid off of it – let SPJ bloggers post on the topic and encourage members to comment on those posts. Then the president can winnow those many voices to one – his – a week later and issue a formal statement.

“You got to be nimble,” Hollander says. “You got to be able to respond quickly. You can’t wait a month for it come out in Quill.”

3. Counseling is as crucial as coverage

“It was surreal, having written for a newspaper, to suddenly be the subject of a national news story,” sports editor Nick Fouriezos told me. Nothing freaks out a journalist quite like becoming a source for other journalists. SPJ doesn’t have to choose sides to offer moral support and practical advice – to both sides.

Bottom line? SPJ needs to get its hands digital and dirty. 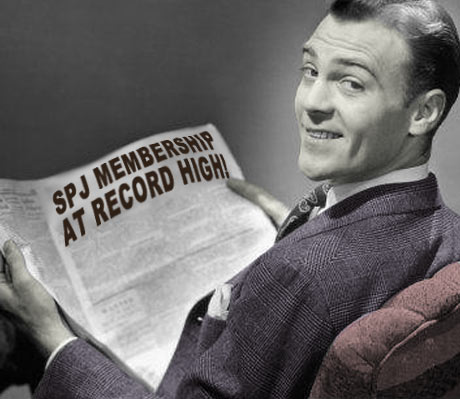 Let’s get quicker – and even bigger.

Still not convinced this matters? Hollander let his SPJ membership lapse a couple years ago. “I kept IRE and an academic organization, but I streamlined the rest,” he says.

When SPJ showed up at his office in person to interview him about The Red and Black, and when a detailed blog post went up that same evening, “I told myself I gotta join again.”

Then the blog post disappeared – and so did his membership application. “No way,” he told me.

SPJ needs to find a way. Otherwise, the next generation of journalists won’t look at SPJ as the nation’s largest and most venerable journalism organization. They’ll just see it as…old and slow. 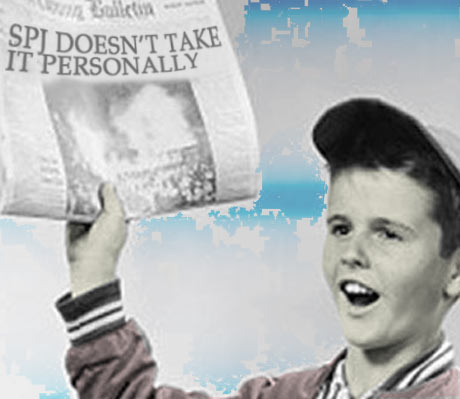 It’s another irony that SPJ encourages aggressive reporting about any entity except itself.

When I wrote this Huffington Post piece about the last big SPJ controversy, the past president emailed me and the board and accused me of a “constant defiling of this board” – “I’m done standing quiet and let you steamroll this board any more. I’m fed up with your blogs.”

I countered, “Nothing I’ve written about SPJ falls outside the bounds of how traditional journalists criticize leaders in other spheres of our society. A ‘constant defiling’? I challenge you to find such a blog post from me.”

Alas, the past president didn’t accept the challenge. I never heard from him again.

Ensslin is not that guy. While I’m sure I’m his least-favorite board member right now – and there are a whopping 23 of us to choose from – I also know he’s not going to publicly call me a defiler. (Too bad, I’d make a T-shirt.)

Ensslin has done much in his one-year term to make SPJ a little less tech-stupid. He helped me host SPJ’s first-ever webinar, and he used GoToMeeting for a board meeting. That’s a big improvement over the previous technology – a conference call with 23 board members. (Try it sometime, it’s ridiculous.)

Ensslin’s term ends next month, and his successor is an equally easy-going and reflective guy named Sonny Albarado. Maybe as past president and new president, they’ll heed this message, even if they’d prefer to shoot the messenger.

Or maybe no one’s read this far…