PART I: A depressing lesson

Being too cool or too corporate is the same paralyzing problem.

I learned that lesson last Saturday while hosting a Zine Party. I tried to lure pro journalists to a tiki bar on the beach in South Florida, where I’d buy them an alcoholic beverage and cheap pizza in exchange for a few hours of their creativity.

It sort of worked.

PART II: The zine vs. the routine

Only 26 people applied, four didn’t show, and two left after an hour.

None of them hailed from the Big Three daily papers in this area: The Miami Herald, Sun Sentinel, and Palm Beach Post.

When I tried recruiting a daily reporter I’ve known for years, the conversation went something like this…

reporter: But what will we do there?
me: Whatever you want. As long as you assemble a zine in one night.
reporter: But what should the zine be about?
me: Up to you.
reporter: That doesn’t make any sense!
me: (sigh, pause) OK, think back to when you decided to be a journalist.
reporter: (suspiciously) Yeah…
me: Was it your dream to sit in a cubicle, cover marathon meetings, and feed an insatiable blog?
reporter: (suspiciously) No…
me: So we want to recapture some of that original spirit by gluing together a raw little magazine using no computers. A beach motel will be your newsroom, and no one will be your editor.
reporter: But I can’t put that on my resume!
reporter: You’re right. I was thinking crazy. Talk to you later.

I succeeded in tempting one former Big Three reporter, and she didn’t write a word – she drew cartoons and illustrations. Her renderings were crude, the content was rude, and they were all simply perfect for this twisted project. (That’s her pictured above.)

PART III: The freedom of freelancers

As usually happens in my life, when something doesn’t go right, I steer in the completely opposite direction.

(I’m not saying this is smart, I’m just saying it’s what I tend to do.)

So I recruited the co-owners of an alternative news and culture site called Salty Eggs. One of those owners quit a Village Voice-owned weekly down here because she thought it was too corporate.

Hey, anyone who calls the Village Voice “corporate” will surely convene a mean zine. Right?

Instead, this edgy chick and hipster dude nearly torpedoed the party.

They brought along two of their freelancers, but they all resolutely refused to split into teams. (One said, “We came here to be together.” How alternative.)

Reluctantly and eventually, the freelancers conceived their ideas. One wrote a touching profile on a punk rocker who had died that week.

The other interviewed old men on the beach. She’s in her early 30s, and her father was born in 1947. I got the sense she wanted to know more about his life than he was willing to reveal. So she sought out – and found – a couple of guys born the same year. And she talked to them for hours about their jobs, women, and family.

That’s her above. She was the last one to finish. But her bosses were the first to flee.

PART IV: The constipation of coolness

In the spirit of the Summer Olympics that were concluding the next day, we divided into two teams and mock-competed for best zine.

Each team had its own motel room. In one, the conversation was loud, obscene, and filled with laugher. In the other were the Salty Eggs.

The owners each sat silently on a bed. Those headboards might as well have been waterboards.

They didn’t know what they wanted to write, and they refused to brainstorm out loud. Meanwhile, a business blogger decided to compose a sonnet, and a public radio freelancer announced she was going to cut up an old book about Nietzsche and rearrange the words to describe her “only near-one night stand.” That’s her above.

PART V: Egg on their faces

I tried to motivate the Salty Eggs owners. I spoke with the woman who’s the EIC…

me:“What’s something you can’t write about on your website?”
Salty Egg: (offended) “I can write about whatever I want. We’ve covered extreme fetishes.”
me: “You don’t have to be extreme to do this. One of your freelancers is interviewing old guys. The other is writing an obituary. Don’t you have something, anything, you really want to say?”
Salty Egg: (pause) “I could write some feminist rants. But I dunno.”
me: “Go for it! Then comes the fun part – designing it.”

She and her co-owner, a soft-spoken guy dressed in faded black, returned to the tiki bar for a drink. They left 30 minutes later without saying goodbye.

When the Salty Eggs owners first met their fellow participants at the tiki bar, I could tell they were underwhelmed. They wanly greeted an editor for a cruise magazine company, a social media director for a luxury hotel, and a researcher for a national business website.

These are citizens they don’t usually mingle with. So when we crowded into that motel room, they faced self-imposed pressure to concoct a stunningly gritty idea that would shame those mainstream androids into acknowledging their edginess.

Except everyone else kicked their alternative asses. So when they failed, they fled.

PART VII: Why I know this to be true

Like the Salty Eggs owners, I’ve launched an alternative publication before. Two, in fact. When you do that, you start defining yourself by what you’re fighting against. After all, if you call yourself an “alternative journalist,” the natural question is, “Alternative to what?”

The worst part is when the mainstream gradually accepts some of your views, which inevitably happens in this wonderful country. But as the ragged edge of edginess starts to drift, you have to keep up with it. Suddenly, you’re a reverse conformist, just as obsessed with avoiding trends as others are with following them.

It took me a long time to realize that everyone alternative isn’t noble, and everyone mainstream isn’t uninspired. Maybe Salty Eggs hasn’t learned that yet. Or maybe I’m just projecting my own psychoses onto a couple of people I met briefly at the beach. 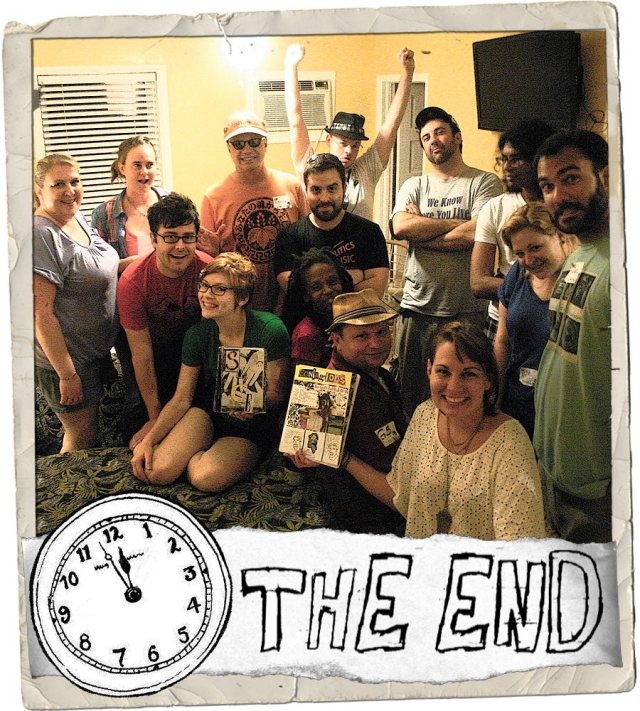 I was right about one thing, though. I told the Zine Partiers at the beginning…

“Those of you who have never done anything like this will probably do better than those who have.”

…because I believe journalists do best when they’re freaked out just a little bit. By contrast, no mind is more fossilized than the one calcifying inside the skull of a comfortable newspaper reporter. Or an arrogant alternative editor.

Yesterday, one Zine Partier emailed me her reflection on the evening. She called it, “exciting, messy, loud, stressful, sticky, hilarious, and ultimately deeply satisfying.”

So we’ll do it again next year. But I sure wish it would happen somewhere else before then. Probably won’t. If we can’t convince mainstream journalists to show up or alternative journalists to stay put, how will we convince anyone else to throw their own Zine Party?

If you click either zine cover in the photo above, you can see the 52 pages that took 10 hours for 20 people to construct.

If you can’t look past the typos, the choppy writing, and the distressed design, then I feel guilty making you read this far. Because I’ve wasted your time.

But if you like what see and understand why we did it, holler and I’ll help you host a Zine Party. To get you started, I’ll write you a check for $12 – because that’s how much I just invoiced the Salty Eggs owners for the two drinks I bought them.