Here are some nationally award-and-grant-winning j-ed programs I created and others who are much smarter than me have massively improved upon. None of them use lectures, podiums, or Powerpoint. Several include violence, gambling, and lying. All involve free food.

I provide money for some and advice for all – I’ll help you with the boring logistics so you can focus on the fun, creative parts.

If you want to know more or attempt one of these for yourself, email journoterrorist@gmail.com.

Can you really teach Constitutional rights by beating up a rabbi, bum-rushing Amnesty International, then sitting down for lunch? Hell, yeah! More than two dozen schools have already done so. (Here’s one.) Offer your students a free meal in exchange for signing away their First Amendment rights. 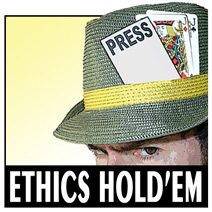 Can you teach journalism ethics through gambling? Hell, yeah! The game is Texas Hold’em, except the faces of the cards have entries from SPJ’s Code of Ethics. Some entries are repeated on different cards. (There are thankfully more cards than rules in the Code.) Find the matches, win 100 chips.

Will Write for Food

20 college journalists eat dinner at a homeless shelter, then take over the second-largest homeless newspaper in the nation – and write, shoot, and design it all in one weekend. We pay for your food, travel, and hotel, although you won’t be sleeping much. Wanna join us? Details here.

What happens when the SPJ Code of Ethics is willfully and shamelessly violated? Show the world (or at least your campus) what newspapers would look like without any journalism ethics at all – and have fun doing it. This is an April Fools parody with a purpose. Here’s how one school did it. 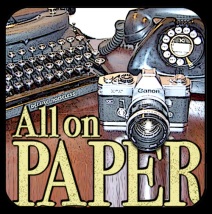 What happens when a college paper publishes an issue using no computers? Stories written on manual typewriters. Photos shot with film and processed in a darkroom. Editing in pencil. Design on paper. We bring old-school (and old) journalists into your college newsroom, so they can show how it was done back in the day. Looks like this.

Here’s how the first one went: We rented two hotel rooms on a South Florida beach, split into teams, and worked all night on a pair of zines. We used typewriters, pens, cut-up old magazines, crayons, and rubber stamps to write and design whatever the hell we felt like. An it was obscene and fucking educational. 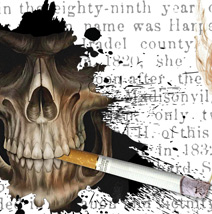 Learn by dying in this obituary-writing workshop. You and other reporters cover a mock memorial in a real funeral home, interview real relatives who are grimly playing along, then drive to a real newsroom to write an obit in an hour. The best one, as judged by the dead, wins an engraved funeral urn. Read the winner and runners-up.

College journalists are adept at social media but not very social when it comes to interviewing. So we teach interviewing skills using zombies. Why? Because if you can successfully interview the undead, you can interview anyone alive. The very best interviewers get made up as zombie journalists for the rest of the evening. Read more here.