Can a T-shirt protect a reporter?

Yes, but only because the worst people at Trump rallies are also the dumbest.

Maybe you’ve heard about all the journalists getting hassled at Trump campaign events. They’ve been threatened, shoved, punched, choked, and last week, had a phone knocked out of their hands.

Problem is, these reporters are easy targets. They’re confined to “media pens” – which one reporter describes as “a rectangle of metal bike racks corralling the press” – where all the assholes can take aim at them. What they need is political cover.

Here it is, literally political cover… 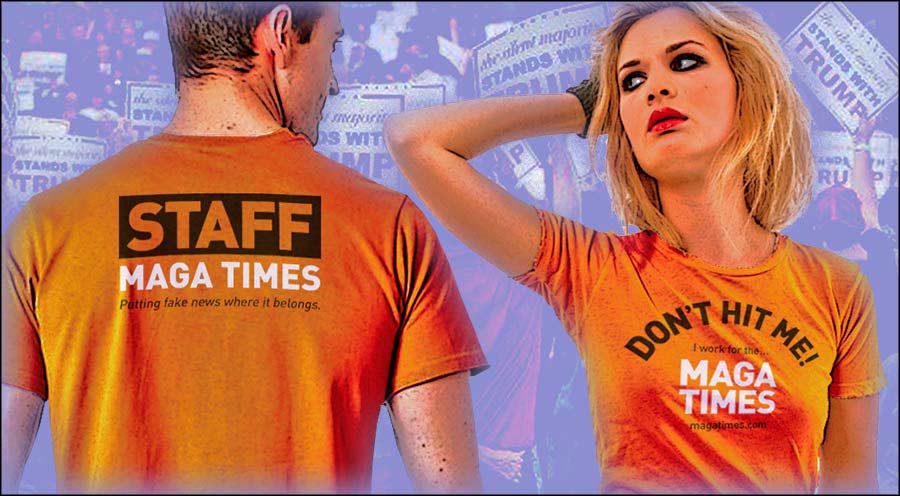 Any reporter assigned to a Trump rally can get one of these shirts for FREE. On the front it says, “Don’t hit me! I work for the MAGA Times” and includes a URL. On the back, it says STAFF and includes the MAGA Times slogan, “Putting fake news where it belongs.”

Shirts come in small, medium, large, and extra-large for both unisex and women’s cuts. You can get any color you want, as long as it’s orange.

So what is the MAGA Times? It’s not real, but it’s not fake, either. The website says COMING SOON, but to keep this process ethical, the site will link to your rally coverage. Thus, you sort of are working for MAGA Times.

But how will wearing a T-shirt keep reporters from get pummeled? Ask Kristina Partsinevelos.

Several points throughout the night, not just from President Trump, everybody that spoke before him, did call out the media. And me standing there, I’m not holding any Fox Business anything, the entire crowd turned to boo. One guy was taunting a reporter next to me, and I didn’t even know what network he was from.”

If only she had worn her Fox Business shirt. All those boos would’ve slid right by her – and landed on those lamestream media reporters huddled nearby.

Neither Trump nor his rally supporters are known as detail people, so a MAGA Times shirt should work just as well. Order yours below. Since I’m not made of money, you must a credentialed news reporter to get a free shirt mailed to you…

By the way, I’m nonpartisan about reporter abuse. So if this crap starts happening at Bernie, Beto, or Biden rallies, I’ll offer these shirts for free…