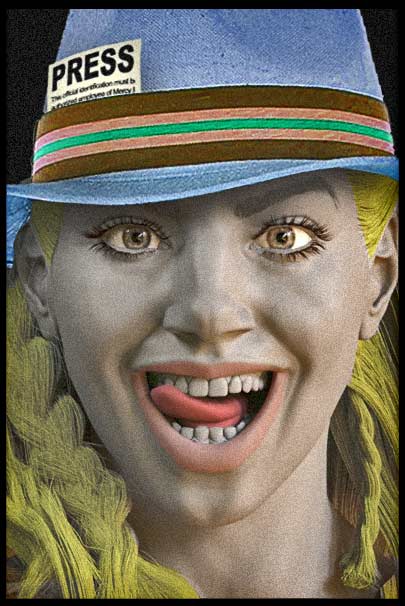 Almost all the sex I’ve had is because of journalism.

This just occurred to me today. I arrived in Orlando for the Florida Scholastic Press Association’s annual convention, where I’m presenting a couple of sessions tomorrow to high school journalists.

FSPA is nothing if not traditional. I attended this same convention as a senior in 1983, and it’s still in the same hotel – the Wyndham Resort. This is where I lost my virginity.

I had two sexual encounters here, both ending in bloodshed. Neither were my idea.

In 1983, I was co-editor of the Boca Raton High School newspaper. To give you some idea of how long ago that was, the paper was called The Predator. (Our mascot was a Bobcat, so…)

Our adviser Ted Backes drove us to Orlando in a school van. That first night, students prowled the Wyndham’s grounds up until the 10 p.m. curfew. I reluctantly went prowling with an obnoxious sports writer named Chris, who had talked during the entire van ride about finding “some poontang.”

I wasn’t looking for that, because even as a sexually irrelevant teenager, I instinctively knew this kind of talk wasn’t only disgusting, it was antithetical to the goal of actually finding poontang. And I was right: All the girls Chris approached rolled their eyes at him.

As we somberly shuffled back to our rooms to make curfew, poontangless, I saw a girl who looked familiar. She instantly recognized me: “You’re that funny intern guy!”

I’d spoken to her class at Lake Worth High School a few weeks earlier. I was part of an internship program that’s also an anachronism: I ditched the second half of my school day to work at a local newspaper for credit, and I also recruited other students by speaking at their schools – where I just drove up, got out, and walked into a class. No search or nothing.

Anyway, I remembered this girl because she was very tall and attractive, with almost white blond hair cut into a funky bob. She was also drunk, because she tasted like liquor when she said again, “You’re funny!” and stuck her tongue in my mouth.

I’m not quite sure what happened next, or how we ended up in an unlocked janitor’s closet. In between a lot of clumsy groping – because she was drunk and I didn’t know what I was doing – she told me her name was Dori. She also told me what to do, and when and where, for which I was grateful.

Unfortunately, she was too drunk to execute her own deft moves, so she bit me in the most vulnerable place. I didn’t realize it right away, because the novelty of the moment was consuming me. But at some point, I felt a sharp pain that kept getting sharper.

I soldiered on but eventually had to stop. I snuck Dori back to her room well after curfew, which was difficult because she repeatedly misremembered her room number. Then I snuck back into my room, where Backes and Chris seemed to be asleep. They were, obviously, pretending. When I emerged from the bathroom where I was tending my wounds, Backes flipped on the light and scowled at me, demanding I tell him everything.

Intimidated, I did. But not before invoking my off-the-record privilege. They listened, laughed, and swore to protect their source.

The next day, I had an uneasy feeling that I was being stared at and talked about by students and teachers alike. This was confirmed when the Boca High “yearbook girls” – the staff was mostly female, also a stereotype of the era – deigned to speak with me for maybe the first time ever.

I wanted to approached Dori but wasn’t sure how, so I welcomed the yearbook girls’ advice. They seemed eager to help – in retrospect, probably because they considered me a challenging project. So did Backes, who helped me in his own weird way: He lent me his Members Only jacket. That was a big deal in the early ’80s. Kind of like donating a kidney today.

When I walked up to Dori at lunchtime, she was with her friends, and they all leered at me. I don’t remember what I said, but I recall stuttering. I must’ve been disarmingly awkward, because they all slowly smiled. Dori told me to swing by her room that evening so we could “go somewhere and talk.”

When I knocked on her door, one of her roommates opened it. In her underwear. She grinned and told me to come in. Dori sneered, pushed her aside, grabbed my arm, and dragged me down the hall. To this day, I don’t know what that was about. But for years, I marveled at the possibilities.

Dori’s “somewhere” was a hotel tennis court, which was closed but not locked. (In retrospect, this hotel was lax about its security.) We didn’t, of course, talk much. Alas, a paved tennis court isn’t ideal for the missionary position, so by the time we were done, I noticed (and felt) my knees bleeding.

I again cut the night short, and when I got back to my room – once again well past curfew – Backes was ready to scold me. Then I told him about my knees. Either out of pity or from the absurdity, he never reported me – although he did describe both nights when he signed my yearbook a few weeks later. As did Chris and a few other Predator staffers he later regaled. This is why my parents have never seen my yearbook.

No pain, no game

Dori and I went on two dates afterward. But when she tried mounting me in a movie theater, I realized I wasn’t daring enough for her. We broke up two weeks after the FSPA convention.

I graduated high school, and on the eve of driving to the University of Florida, I had sex with a girl I’d met at The Predator – beginning a decade of on-and-off hooking up. It was notable as the first time I had pain-free sex. Until that moment, I wasn’t sure if my sex life would kill me.

At UF, I briefly dated three women who had nothing to do with journalism. But from then on, every sexual encounter was either with a journalist or someone I met through journalism.

During my sophomore year, I began working at The Alligator, UF’s independent student newspaper. I dated four women in my five years there. All of them broke up with me, but one became a lifelong friend.

All those women were talented journalists, so we were equals. Three of them were newsroom leaders, supervising others. For men who still cling to old-fashioned notions of women, I suggest dating a woman in charge. It’s both exciting and enlightening.

One of those women was Susan. When she dumped me, she set me up with her friend Kristen, an archeology major. While Susan didn’t want to see me any longer, she knew Kristen and I had a lot in common. I thought that was sweet, and I still believe the world would be a much happier place if such handoffs became a cultural norm.

Next was June, who I met through UF’s chapter of the Society of Professional Journalists. I’m now the longest-serving SPJ national board member, but the truth is, I wouldn’t have joined if not for that sex long ago. SPJ’s membership has plummeted by a third since I was first elected to the board in 2008, but I don’t think the organization would embrace my idea for reversing the slide. (New slogan: “Free press, free love.”)

After college, my first reporting job was covering the smallest county in Georgia. In my year there, I dated a reporter and then an ad rep. I quickly learned that ad reps are more fun, less cynical, and better compensated. I decided right then not to marry a journalist.

Still, I dated seven more journalists before taking a detour with a stripper I encountered through journalism – which I’ve previously documented – and finally meeting my non-journalist wife when I was an entertainment editor and she was a keyboardist.

I’m now 54 years old, walking around a hotel I haven’t seen in decades. The tennis courts seem to have disappeared, but I visited some of the 13 two-story buildings that comprise this hotel and jiggled the handles of the janitor’s closets. They were all locked. Good for them. Bad for sexual exploration.

I’ve long known that journalism changed my life. Today, I realized how much it changed my sex life.