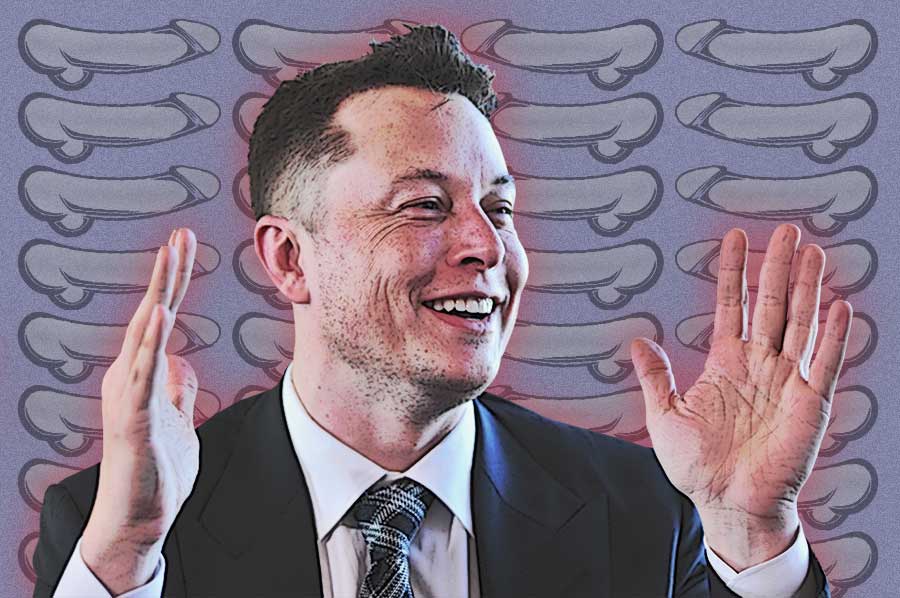 Actually, let’s talk about the woman who tweeted about his “giant dick.”

Her name is Erin Biba. She pretends to be a journalist, which taints all real journalists. Biba recently achieved a nanosecond of national notoriety for writing about Elon Musk. Or more specifically, Musk’s fanboys.

Biba wrote this for the Daily Beast… 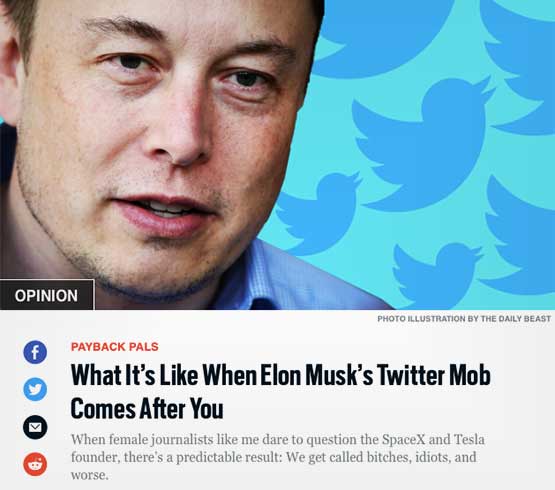 …and as far as opinions go, it’s not half bad. Which of course, means it’s only half good.

Biba’s premise is that Elon Musk – builder of electric cars and rocket ships – has a Twitter following of rabid misogynists. They harass female journalists who criticize Tesla and SpaceX, but they go easy on dudes who do the same.

Biba wrote more than 2,000 words on the topic. Alas, it takes her 600 to mention anyone but herself. When she finally quotes other journalists, she sort of proves her point. The best line is from Engadget’s Roberto Baldwin, who has criticized Musk in the past without incident: “If I were browner and had boobs, it would be a shit show.”’

But what does this have to do with Elon’s schlong? I’m getting there. It’s hard to write well about bad writers.

Anyway, Biba’s motivation for writing the Daily Beast piece was a single tweet, which Musk just happened to see… 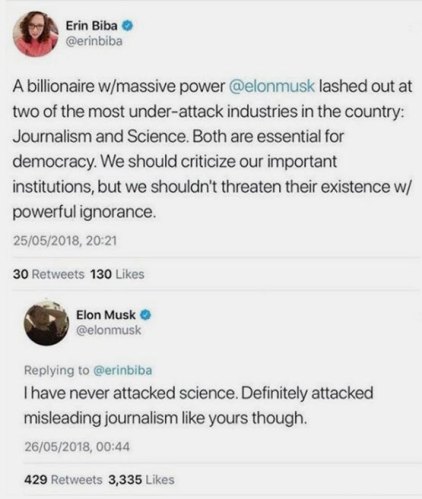 …and that led to the “MuskBros” pouncing on her. But here’s the thing: She started it.

Biba – who describes herself as a “science writer” – had been shit-tweeting Musk for months. She was outraged by Musk’s February SpaceX launch, which made headlines like this… 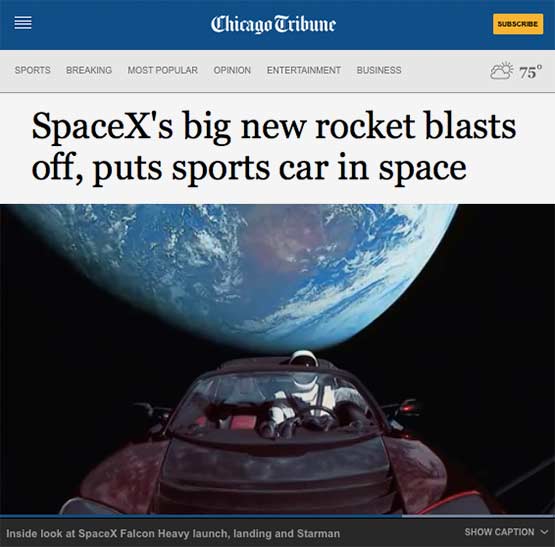 Yup, Musk combined his two companies into one crazy PR move by blasting a Tesla into space. His companies and his money, right?

Wrong, according to Biba, who tweeted… 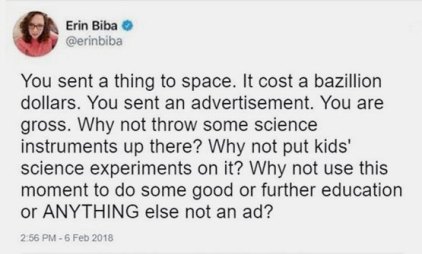 But calling Musk “gross” wasn’t as precious as this tweet…

What the hell? At least Biba had enough self-awareness to realize she “might be going too far,” but even that brief reflection is undercut by five emojis.

Of course, like everything else today – including football and basketball – this quickly became a left-right thing. While I was more concerned about a journalist talking about a source’s junk, the conservative press reveled in a gotcha moment, the currency of today’s realm.

After her Daily Beast post, Biba had tweeted about Musk, “I gave him the benefit of the doubt in my story.” Yet all her old shit-tweets were still public.

The conservative social media aggregator Twitchy summed it up like this: “not only did she pick fights, she went out of her way to frame the story from the get-go as some sort of attack on female journos.”

So once again, a hack journalist drags down the rest of us. In fact, the conservative press had more ammo than it expended… 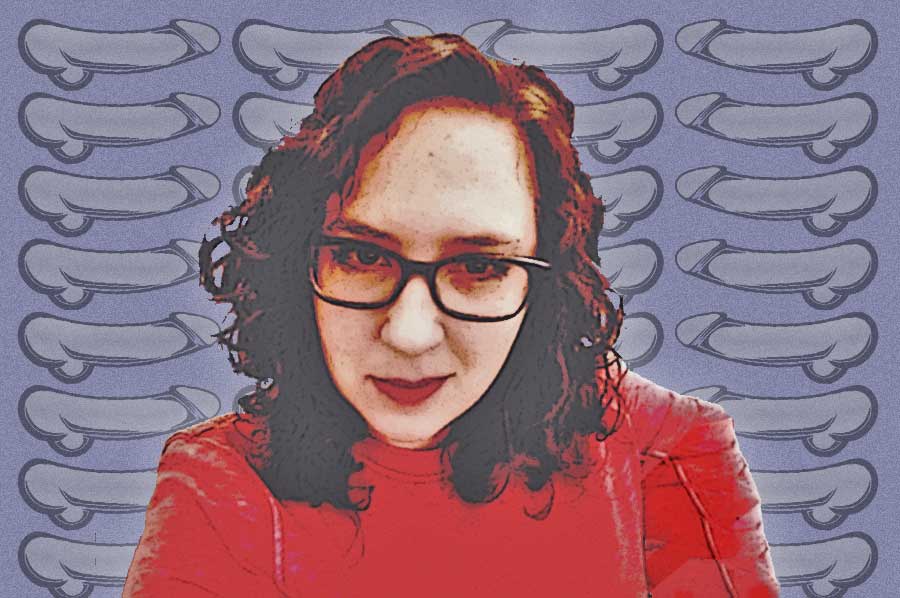 First, a dick joke is beneath even a journalist. If you cover that same guy, it’s also unethical. The SPJ Code of Ethics doesn’t specifically address giant dicks swinging in outer space, but applicable entries might include, “Abide by the same high standards they expect of others” and “Avoid pandering to lurid curiosity, even if others do.”

Second, if you make a dick joke, you can’t take it back. Like a dummy, Biba removed her “giant dick” tweet, along with some other Musk insults. Of course, the twittersphere instantly noticed and gave her even more crap than before. What journalist hasn’t learned, “The coverup is worse than the crime”?

Third, you’re a hypocrite if you lash out and then shut up. I’m not a great journalist, but I’m a good one. So I contacted Biba for her side of this twisted tale. With five minutes, she blocked me on Twitter. I’ve said it before: Nothing’s more hypocritical than a thin-skinned journalist. You dish it out, you should at least take questions.

Fourth, freelancers are often freeloaders. Biba boasts about writing for major publications like Newsweek, Wired, and Popular Mechanics. But she’s not employed by any of them. As a freelancer, she’s hired per assignment and works alone. She doesn’t sit in a newsroom, where an editor would probably tell her, “Hey, dumbass, stay off Twitter or we’ll fire you faster than Roseanne Barr.”

(The New York Times, like many publications, has a social media policy for its reporters. Among the entries Biba shredded: “Always treat others with respect on social media,” never “make offensive comments,” and “please avoid muting or blocking people for mere criticism of you or your reporting.”)

Fifth, never embrace your own arrogance. Four years ago, when Biba was less experienced than she is now, she wrote a Medium post decrying her low pay as a writer because…

I have a $60,000 graduate journalism degree from Medill, nearly a decade of writing experience, and, let’s be honest, I’m super smart and seriously good at what I do. I can write and report a kickass story with my eyes closed and one hand tied behind my back.

Maybe that was the problem with her Musk post. She didn’t close her eyes.

Erin Biba is the worst kind of journalist precisely because she has just enough talent to publicly embarrass a profession that needs no help doing that. All I can say is: What a dick.