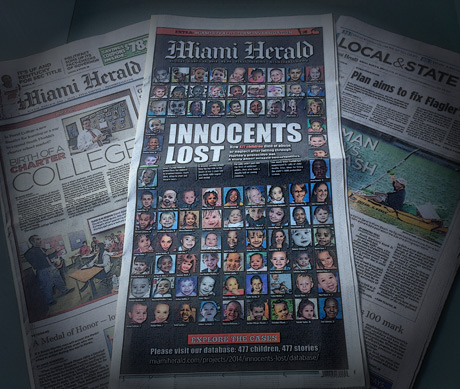 Innocents Lost is a weeklong series about the tragic deaths of 477 children under state care.

The Herald had to file three public records lawsuits and create its own database going back to 2008. The results debuted Sunday: a powerful website and a 16-page special section with no ads. It required three reporters, three designers, three editors, a photographer/videographer, a database manager, and 13 staff contributors.

This project obviously cost a lot. But my question isn’t, “What did it cost the newspaper?”

What did it cost the readers?

On the same Sunday, The Herald’s local section was woefully thin. It featured a staff-written…

• weekender on plans to fix “poor, shopworn Flagler Street”
• profile on a kayaker who cleans up canal trash
• short obit on a 73-year-old former cop
• review of a “serviceable” theater production

The rest of the local section featured a pickup from Politifact Florida about the governor and two stories from the Sun Sentinel – the Tribune-owned daily in Fort Lauderdale that was once a fierce competitor but now operates under a content-sharing agreement.

Neither of these Sun Sentinel stories were particularly compelling to a local resident like myself. One was about the Florida Turnpike cracking down on toll-jumpers. The other was headlined, “Mystery goat captivates lifeguards” – in the next county to the north.

All politics is local, but too little journalism is.

I live in a large city 19 miles outside Miami. When I started subscribing to The Herald a dozen years ago, we had our own metro reporter. No longer. Now I have to Google for my City Commission’s latest decisions.

I often hear that newspapers are still hale because their investigative journalism is thriving. But these days, you can’t win Pulitzers and cover City Hall at the same time.

Of course, few newspapers are good enough to enjoy the luxury of deciding between local coverage and investigative journalism. The Herald is one such operation.

If newspapers keep sacrificing local coverage for big scores, and if readers like me – who have stuck it out through the recession – start dropping their subscriptions because the paper isn’t relevant, will investigative journalism still fulfill its mission?

I wonder if corrupt governments and businesses will feel the proper shame and political pressure when they learn no one is reading these special sections and powerful websites.

Then the question will become…

If you shine a light in a forest and no one is around to see it, does it still illuminate?

This is not at all a slam on The Miami Herald. In college, I knew Herald editor Aminda Marques – when she graduated, she bestowed upon me her New York Times freelancing gig. I also worked at the aforementioned Sun Sentinel with Audra Burch, one of the three Innocents Lost reporters. We covered a couple stories together and shared the same low opinion of our metro editor.

Marques and Burch are both no-bullshit, ink-bleeding journalists. I hope they win. But I feel like I’ve already lost.