When I met Bill 15 years ago, we were both uncomfortable copyeditors.

We had replied to the same blind ad looking for eagle-eyed freelancers with InDesign skills. We didn’t know the job was at American Media Inc. In 2002, AMI owned all the trashy supermarket tabloids: The National Enquirer, Star, Globe, and National Examiner.

About a half-dozen applicants were summoned to the AMI newsroom in Boca Raton, Florida. (Another newsroom was in New York City.) We were each given one page to edit and build, with precious little instruction. It was a brutally quick weed-out process, and only Bill and I survived.

That’s how two guys who knew nothing about fashion and celebrities ended up editing weeklies for women. Eventually, Bill got hired full-time. I declined the same offer, but we continued working together.

Bill was a shy, bald, babyfaced white dude who had recently converted to Hinduism – specifically Gaudiya Vaishnavism, whose followers are better known as Hare Krishnas.

I’m unsure if Hinduism made Bill peaceful and cheerful, or if he always possessed those traits, and that’s what drew him to Hinduism.

A few years later, when celebrity gossip websites began cutting deeply into the tabloid business, we were both laid off. I lost touch with Bill until just recently, when we friended each other on Facebook.

I wasn’t surprised to learn Bill voted for Trump – I’m way past that point. I was surprised how zealously he embraced a man who seems to contradict his religious beliefs. (“Consciousness is not a product of matter but is rather a symptom of the soul” vs. “The point is, you can never be too greedy.”)

Yet Bill likes to post, “MAGA!!! There certainly are a lot of good things that happened during Trump’s first year as president” and “Feminism has nothing to do with equality. Feminism is the oppression of men by women.”

Bill has either resolved this inner conflict or ignored it, because he can post the following images only days apart… 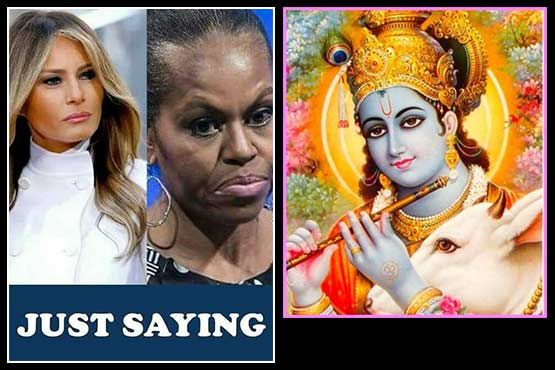 …and that’s just fine. How someone meshes their religion with their politics is beyond my critique. But this isn’t: Bill was a damn good journalist and a reflective human being, yet now he’s a knee-jerk jerk. Here’s our Facebook exchange from last week.

I’ve edited this down because it plodded on for even longer, and I’ve blacked out Bill’s last name even though he’s not hard to find…

So how did Bill get like this? It all became clear a few days ago, when he posted this… 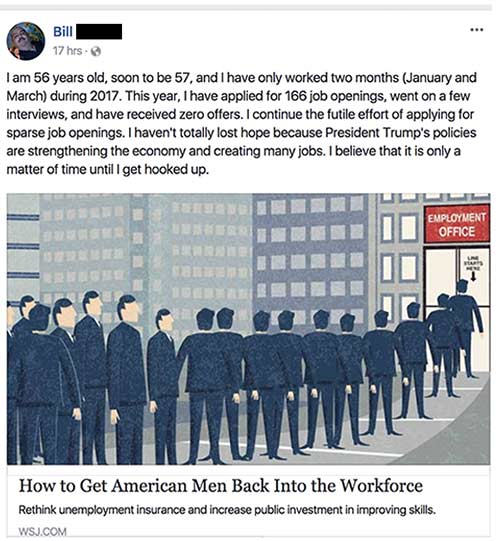 …and also mentioned he’s “temporarily” living with his mother. This saddens me, because Bill is a better copyeditor than I’ll ever be. He’s patient, diligent, and not easily distracted. (I’m rarely any of those things.) Yet he’s also so quiet, I imagine he bombs in job interviews. He’s actually the opposite of Donald Trump: all work, no hype.

If I had a copyediting position open, I’d hire Bill in an instant. Of course, if I did, he probably wouldn’t thank me. He’d thank Trump.

Leave a Reply to brothers of a different krishna Cancel reply