My day job is so sedate, I sleep deeply at night. I’m the editor of a personal finance news site. I assign stories on important but boring topics like the little-known benefits of group insurance and how 401(k) loans are killing retirement plans.

When Donald Trump emerged as a serious presidential contender in late 2015, I decided to cover him – from a money-only perspective. What would President Trump do for the average American’s bottom line?

By the way, this is the average American’s bottom line…

…and that’s nothing to yawn at.

Since Trump campaigned on “protecting American workers,” we studied his policies more than his politics. So it was in January 2016, we actually predicted his victory.

“If the election were held today — and everyone voted with only their wallet in mind — Donald Trump would probably be the 45th president of the United States,” wrote Debt.com columnist Brandon Ballenger.

Ballenger hated being right, because he loathes Trump with every bone, muscle, and sinew in his liberal body. He writes a weekly column that shreds Trump for everything from proposing deep budget cuts (“nonsensical”) to thinking about getting rid of student loan forgiveness (“horrifying on a number of levels”).

Ballenger’s weekly eviscerations are compelling and persuasive. What I’m looking for is someone to shut him up. Doing that will require an un-Trumpian-like subtlety.

I’m not looking for reflexive defensiveness, deflective whataboutism, or predictable orthodoxy. Even Ballenger has grudgingly written, I Agree With Trump’s Top Banking Regulators.

Your weekly opinions must be backed up by facts, and they must connect, however obliquely, to money. So I don’t care what you think about North Korea, Confederate statues, or the Mueller investigation.

You’ll be paid a whopping $100 a week. Then again, I’ll do everything in my power so each column takes you only two hours. We have interns who can help with research, an artist who will draw disturbing illustrations for your columns, and a social media team that’ll pimp your shit.

If you want to know more, or you know someone else who might, here’s the job description… 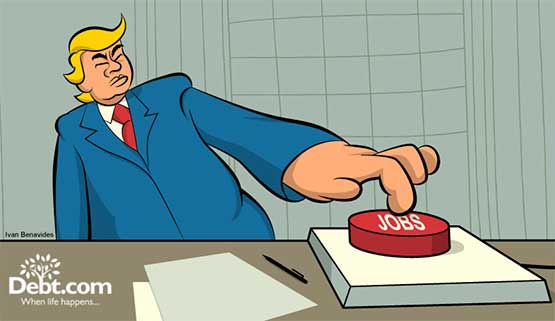 Overview: Debt.com is a growing provider of personal finance news, education, and solutions. We seek a weekly columnist to defend Republican decisions that affect the finances of average Americans. You’ll run opposite a columnist who argues most of these decisions are terrible.

Specifics:
• Write 600-900 words weekly on topics either we assign or you propose and we accept.
• Topics include credit card debt, the student loan crisis, rising auto loans, mortgage issues, and healthcare costs.
• Topics don’t include the general economy, the national debt, Afghanistan, building the wall, or bloody political battles that everyone loves to argue about but don’t affect the big debts and small savings most Americans struggle with.
• Pay is only $100 per week, but we expect each column to take only two hours. So $50 an hour ain’t too shabby.

Requirements: We value thoughtful writing and original analysis. We’ve had enough (on all sides) of talking points, name calling, and score keeping. If you can explain why President Trump and Congress have the right ideas for helping Americans get out of their record-setting personal debt, we want to publish and promote your work. (We have a social media team who will spread your message far and wide.)

Apply: Email a resume and links to three writing samples that don’t suck to michael@debt.com. Those samples don’t have to be about money or Trump, but they should reflect the attitude you want to bring to this new position.