IS THIS WOMAN NAKED? Some journalists sure think so.

They also think I’m a sexist troll because I hastily designed this shirt to make a point.

Until last night, I subscribed to an email list for NICAR, short for The National Institute for Computer-Assisted Reporting.

I’ve also heard them call themselves “nerd journalists,” which might be more accurate because they specialize in writing complex computer code that crunches megabytes of information and spits out enlightening conclusions. For example, click the image below… 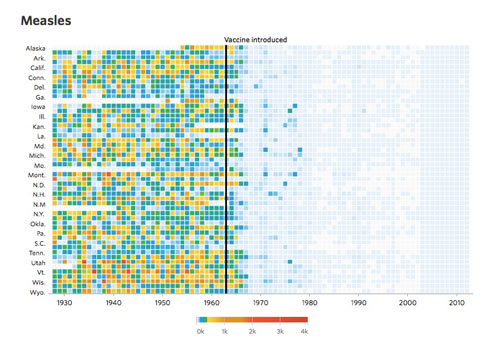 So I’ve had this beef for a while: Data journalists need to work with graphic designers to make their cool shit look cool.

Otherwise, who’s going to read it? And if no one reads it, where’s the nobility in their journalism? How can they change the world if the world can’t figure out what the hell they’re talking about?

Back to the naked woman

NICAR has a convention coming up, and they hosted a contest to design a commemorative T-shirt. Yesterday, they posted the finalists and opened it up to a vote.

I think the shirts are just as ugly as some of their interactive graphics, so in 10 minutes – you can ask my coworkers – I designed the shirt above. It references the Ashley Madison hacking scandal, which made its members’ profiles public.

Since the site’s motto is, “Life is short. Have an affair,” this posed an ethical quandary for data (and non-data) journalists. How could they tell this story without destroying marriages? Or should that even matter? It sparked quite an ethical debate on the NICAR list. So I posted my design along with this email…

As a part-time designer, I was underwhelmed by the T-shirt choices. I think it’s part of a larger problem: Data journalism has yet to partner with designers the way print did in its own heyday. So many excellent projects I’ve seen through this list lack crisp design that would lure more eyeballs. Yes, design is the sugar in the medicine, but if it makes it go down smoother, then it shouldn’t be ignored.

I didn’t expect to hear much of anything, but immediately, a man named Andy Boyle replied…

I don’t think NICAR should resort to objectifying women as a way to sell t-shirts, which your design clearly attempts to do. It’s pretty gross, and not indicative of what the NICAR community is all about.

Surprised, I looked up Andy Boyle. He’s a standup comedian when he’s not a data journalist. He says this in one of his routines…

…so he’s only objectifying butch lesbians. No problem, then.

Then it got worse

From there, NICAR obsessed on the word “naked.”

Angela Woodall: IMHO, the naked chick on the T-shirt, while humorous from one perspective, does not do much from a design angle for the image of women data journalists. In fact, some women might get pretty annoyed.

Me: “Naked chick on the T-shirt”? Who’s naked? I threw together the design because this list had a spirited debate about Ashley Madison not long ago, which I loved because it was about ethics more than code. Not sure why this annoys you or grosses out Andy Boyle, but I stand by my opinion that many data journalism projects need better design.

blch7: As a woman learning data journalism, I’d be really let down if the T-shirt for my first NICAR conference’s main selling point was a naked woman.

Me: OK, I’m not defending a design I did in literally 10 minutes – but there is no “naked woman.”

Andy Boyle: It’s quite telling the only design idea you could come up with to rebuke the fun-spirited work of others is to demean women as sexual objects.

Me: How is poking fun at the Ashley Madison debacle demeaning all women? My design may suck, but it’s not a babe in a bikini. And what is it “quite telling” of? I’m confused.

Olga Pierce: As a female data journalist, I’m very annoyed that my work is being disrupted by trolling.

Me: Trolling? I’m trolling? This is my last email. I’ll unsubscribe now and spare you from my offensiveness. But my last words remain: You guys need to design your shit better.

Then it got weird

Interestingly, for a bunch of self-described computer nerds, they didn’t realize they hadn’t yet unsubscribed me.

So I kept getting their emails, which assumed I was gone. Most gloated, while one grew uncomfortable with the “piling on” and another tepidly tried defending me…

Adam Schweigert: well that was awkward.

Jeff Larson: Hey Mike, not at all sad to see you go. Tootles.

Jacob Harris: I just think it was unfair of all of you to call him a sexist troll only because he deliberately posted a sexist image to make everybody angry.

Sean Sposito: at what point do we decide to stop publicly shaming people… stop piling on… it’s over.

Kate Kelly: We are such an amazing group of journalists and we shouldn’t sink to this level on what ought to be a professional and respectful place to ask questions. I encourage college students and new journalists to sign up to this particular list-serv, but now I’m embarrassed by what they’re reading today.

Dan Nguyen: I know we already said to stop piling on, but just wanted to say that I appreciate the variety of people who did. Nothing says “dead community” like throwing up a wall of apathy toward someone actively trying to be an unapologetic unmitigated asshole. FWIW I can’t think of a time when someone was so blatantly divisive on NICAR-L.

Brian Bardwell: Am I the only one who thinks the tenor has reached a point that is unduly self-congratulatory? The objections to the imagery are pretty reasonable, but it’s fair to note that he was using what I’m pretty sure was the Ashley Madison banner, playing off a serious data story.

So to sum up

I’m a sexist troll because I posted an image of Ashley Madison’s logo that reveals bared shoulders. I’ve offended all women, and so I deserve “public shaming.”

Because I’m such an “unapologetic unmitigated asshole,” the NICAR list is even proud of the “variety of people” who piled on.

I’ve always said there’s nothing more hypocritical than a thin-skinned journalist – we dish it out every day, yet so few of us can take it. But NICAR is even worse. It’s a thin-skinned bully.

These are journalists who gang up on one of their own kind and wail about how they feel threatened by a single email, while never addressing the real topic – how their design skills could stand improvement. Then they pat each other on the back for driving away the evil.