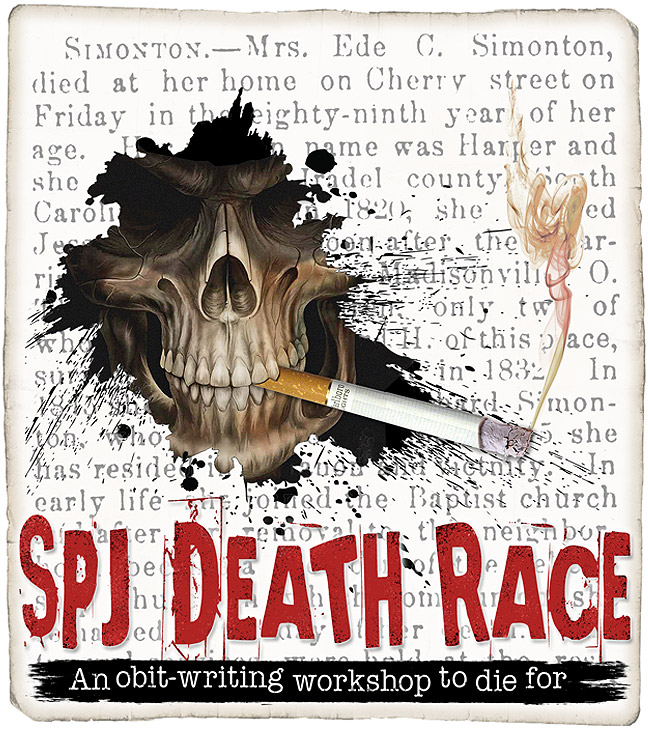 “DYING,” Woody Allen once said, “is one of the few things that can be done as easily lying down.”

Sadly, writing about death is harder than just sitting at a keyboard.

While journalism schools teach students how to cover city commission meetings and write personality profiles, I can’t find one major j-school that offers a class on obituaries.

And if you’re thinking, “Well, that’s because there are lot more important lessons to learn,” check out these actual classes…

I’m not insulting these classes. I’m sure the Pulitzer committee will soon add a fashion category, two-day field trips about food sound like fun, and it’s quite possible that today’s college journalists will graduate into a media industry entirely owned by the Chinese.

But it’s also quite likely that today’s college journalists will have to write about death at least once in their lives. And I pity the families of the deceased who have to read those first floundering efforts.

Since no one else is teaching obituary writing, I’ve convinced the Society of Professional Journalists to do it – by faking the death of a Jew, a Muslim, and a Christian. And because this is America, we’re making it a competition and giving it an anti-smoking message.

For all the dispassionate details on the Death Race itself, click the black box above to see how it went. For my explanations and justifications, read on.

On Saturday, January 19, three South Florida journalists are going to play dead. And you’ll write about one of them. If that sounds gimmicky, know this…

Newspapers have a long tradition of writing obits on former staffers.

And since those aren’t considered plum assignments – cynical but true – they’re handed to whichever reporter is free. One day, that could be you.

When my best friend Mark died in 2006, The Palm Beach Post wrote a full obit on him – even though he had quit as a reporter in 1993. It didn’t matter he’d worked there for only five years, or that he nearly got fired because we started a local alternative magazine in our free time and then sold it to the Sun-Sentinel, the competing daily.

The obit even mentioned the competing magazine. That’s how entrenched this courtesy is. Which makes sense: Journalists are treated so crappily in life  – paltry wages, benefits, and respect – their only company perk kicks in after they kick off.

Pardon the pun, but Miami Herald obit writer Elinor Brecher is one of a dying breed. Very few newspapers these days have a full-time death writer.

In fact, the  Society of Professional Obituary Writers (slogan: “Writing About the Dead for a Living”) seems to have, um, expired.

SPOW is “taking a hiatus.” Too bad, because I had asked for their help with the Death Race. Any group that names their awards “The Grimmies” are my kind of people.

Fortunately, Brecher has agreed to advise our novice obit writers – and help choose the winner (who receives an engraved funeral urn).

As expected, when I spoke to Brecher last week, she called her job “intermittently uplifting and depressing.”

Since 2008, she’s written about “people who make profoundly grave personal decisions, people who take their own lives in rational ways, and people who do amazing things on their death beds.” She says. “I’ve kind of been humbled by some of them.”

And humored by at least one. 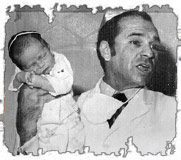 When Abraham Seif died in 2008, he was a well-known mohel – a rabbi who performs circumcisions. Any guy who calls himself “Seif the Knife” and “The Yankee Clipper” (he did most of his work in Brooklyn before moving to Florida) has a sense of humor. And since he was 86 when he died, Brecher says his family was “hilarious.” It’s one of her favorite obits – and the exact opposite of what it’s like to write about dead children.

Interviewing those families can be gut-wrenching. “They can’t even wrap their minds around what’s happened,” she says with an audible shiver.

But the job has made her a better journalist. “I know how to talk to people wo are grieving, who are emotionally unstrung. You have to be finely attuned to human nature. You learn to pick up on certain cues.”

That’s why I believe the SPJ Death Race is a good idea for any journalist, even if they never, ever write an obit.

Three SPJ Florida board members are volunteering to be dead – because they realize it’s a once-in-a-lifetime opportunity.

“We only die once. Why not have a practice run?” asks Gideon Grudo, managing editor at South Florida Gay News.

“Every once in a while, I like to morbidly think about how I’ll die and what my family and friends will say when they think I’m not listening,” says Mariam Aldhahi, an art director with Forum Publishing Group.

“I’m not a morbid person,” insists Cassie Morien, web editor at Boca Raton Magazine. “I just love the idea that I can help other journalists learn an important skill by staying cold, quiet, and lifeless.”

While all three are obviously talking snarky, they’ve invited friends and family to a Fort Lauderdale funeral home and are insisting everyone play it straight.

That may seem impossible: How do you stand in front of a coffin and reminisce about your dearly departed when you know they’re standing outside?

(Grudo, Aldhahi, and Morien have decided to dress all in black and hover near the chapel entrance – where they can hear but not be seen.)

While the mock memorial won’t have the gravity of the real thing, I doubt it’ll come off as campy. I’ve visited the funeral home that’s hosting the Death Race. Just walking through the dark, solemn foyer is sobering. I predict any smiles and sarcasm will fade fast.

The families are already serious. And surprisingly supportive.

“My brother listened intently as I explained the whole thing,” Grudo says. “Then he sighed, told me I’m crazy, and said, ‘Anything you need.'”

“My mom still finds the entire concept eerie and uncomfortable,” Adlhahi says. “My dad and my sister, however, were so excited that it left me feeling a bit jaded.”

“My mother is an elementary school teacher and immediately appreciated the lengths used to show this skill, and my dad was also intrigued by the whole concept,” Morien says. “However, my peers and colleagues are totally creeped out.”

That’s right, Morien’s twentysomething friends are more shaken than the parents who will pretend to bury their children. She has no idea why, other than to suggest maybe her pals are really just jealous.

Morien has such a death wish, “I begged and pleaded to be chosen for this event.” She even started smoking a few weeks ago just to qualify.

Which brings me to the cigarettes.

The most common question I’ve been asked about the Death Race isn’t, “What’s the funeral home charging you for this?”

(Answer: Nothing, although I’m ordering a dessert platter for $295. “It’s our most popular food item,” the funeral director told me.)

It’s not even, “Where did you get an engraved funeral urn?”

(Answer: perfectmemorials.com. Engraving was free as part of a Black Friday promotion, and I got a coupon for 5 percent off my next purchase.)

No, the most common question has been, “Why is smoking such a big part of an obit-writing program?”

On that last point…

I had a hell of  a time finding a Christian journalist who smoked. (Grudo is Jewish and Aldhahi is Muslim – I like religious diversity in my programs.)

Before Morien volunteered, I asked several journalists I know. One begged off because his young son doesn’t know he smokes at work, and he doesn’t want the kid to learn later by Googling his name. The other didn’t want her college-aged daughter to find out she’s resumed the nasty habit. Another doesn’t want his mom to know.

None of them objected to playing dead. They just didn’t like the reason. One suggested, “Can’t I just die in a car accident?” As if endangering others on the road is more socially acceptable than poisoning yourself.

I had one other greedy reason for the cigarette shtick. I figured it would be easier to convince a funeral home to host the Death Race if it had an anti-smoking message. Turns out, it didn’t matter.

“It’s good marketing,” says Muchael Yuhasz, the funeral director at Broward Burial and Cremation. Apparently, the World Wide Web has devastated the death industry just like the newspaper industry. Comparison-shopping has taken its toll on prices, Yuhasz says, and having a bunch of journalists in his chapel “certainly can’t hurt.”

What’s so amusing is that I’ve tried this tactic with other SPJ events, to no avail. I’ve approached restaurants, bars, universities, and casinos and suggested a bunch of journalists in their establishments “certainly can’t hurt.” But only a funeral home is swayed. Not sure what to make of that.

Because I don’t know how to end this blog post, I’ll close with this story about PT Barnum, which I’ve always loved…

Several weeks before he died in his sleep, on April 7, 1891, Barnum read his own obituary: The New York Sun newspaper, responding to Barnum’s comment that the press says nice things about people after they die, ran his obituary on the front page with the headline, “Great And Only Barnum – He Wanted To Read His Obituary – Here It Is.”