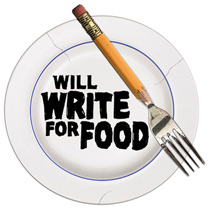 These rugged students survived the third annual Will Write for Food program. They took over the monthly newspaper at a South Florida homeless shelter and reported, photographed, and designed the next issue in a mere 36 hours.

They didn’t get paid, and they didn’t receive any college credit. In fact, the long weekend cost them money, because I couldn’t cobble together enough grants to pay for all their travel costs.

Yet they drove in from all over Florida and flew in from Texas, South Carolina, Oklahoma, Minnesota, Illinois, Georgia, Connecticut, and Alaska.

Fairbanks, Alaska, to be specific. 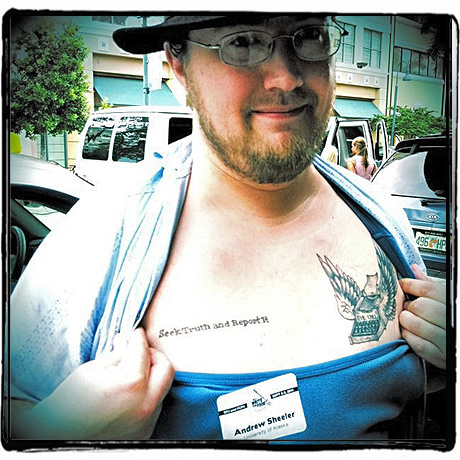 Andrew Sheeler departed Friday night from his central Alaskan home, and I picked him up at the Fort Lauderdale airport Saturday afternoon. That’s three flights, two layovers, and 15 hours.

Then he went to the shelter for dinner, then to our tiny makeshift newsroom (which was being used for storage before we got there), and finally to the “room at the end of the hall” – where residents with the most severe mental-health problems sleep.

Sheeler spent much of Sunday morning in that room, and most of Sunday afternoon writing about it. Monday morning, we took him back to the airport for his 15-hour flight home.

Sheeler never complained. What do you expect from a guy who has “Seek truth and report it” tattooed to his chest? 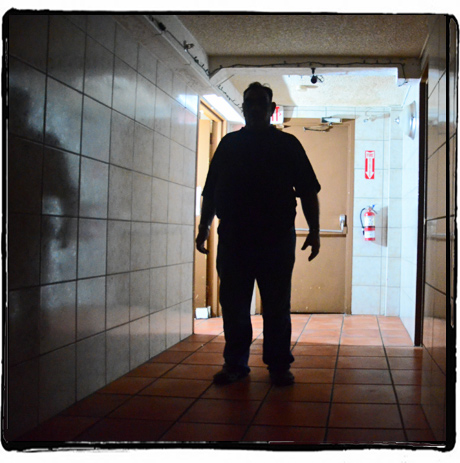 Maybe I’m biased, but I believe the toughest college journalists in the nation assemble every Labor Day weekend at the COSAC shelter in Hollywood, Fla.

When those students dine with the homeless, they learn that looks can be deceiving – which is a lesson I relearn every year just by watching them. Example…

Adrienne Cutway is a soft-spoken, skinny woman who was terrified the first time she stood in the shelter food line. “I started shaking,” she said. “I was so nervous.”

The next afternoon, she and a photographer were interviewing a group of residents when one of the men decided to pleasure himself.

I wasn’t there – I always miss the most interesting developments – but the photog ran back to our newsroom to tell me all about it. Our conversation went something like this…

“Jesus, when did this happen?”
“Just now.”
“So where’s Adrienne?”
“Uh, I guess she’s still there.”
“You left her ALONE with the masturbator?!”

I imagined the scant few grant dollars I scrap for every year evaporating on this disgusting news. But I had nothing to fear. Adrienne casually strode back into the newsroom a few minutes later. When I asked her how she handled this indelicate situation, she replied matter-of-factly, “I just maintained eye contact.”

The entire WWFF11 crew was like that. While we had a half-dozen advisers watching over them, plus shelter security personnel, none of the students were scared after their initial shock at dinner the first night. As one student told me during the inaugural WWFF in 2009, “I feel safer here at night than I do on my own campus.”

The big breakthrough starts with the food. That’s because interviewing the homeless is easy. Eating with them is hard. 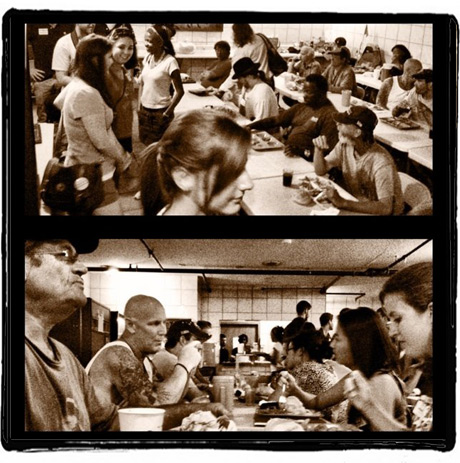 Journalism is just a job, and while reporters try to elicit intimate details from their interview subjects, they seldom reveal much about themselves in the process.

But waiting in the food line, sitting down with a laden tray, and engaging in some dinnertime conversation is personal – and, at first, uncomfortable. So begins the shattering of stereotypes.

“I expected every stereotype and rumor I had ever heard to be true,” said Emily Summars, a senior at the University of Oklahoma. One of those stereotypes was about the meals…

I was thinking we would be eating cafeteria food and mentally prepared myself for the nasty instant mashed potatoes, frozen chicken nuggets and canned cream of corn. Not an Oklahoman’s favorite meal, let me just say. What I actually ate was grilled chicken breast, green beans, seasoned wedge fries, and a giant piece of moist chocolate cake.

Another stereotype was the panhandling…

Not one homeless resident at the shelter asked me for money. In fact, they didn’t even want to speak to me. I tried to speak with four residents before my eagerness for conversation paid off with a lovely woman from Haiti and an ex-stockbroker from New York.

One of Summars’ peers chatted up a former IT director who knew more about computers than she did. And several students were surprised that while all the residents lack a home, some don’t lack a Facebook page.

That dinner seemed to change Summars.

“Going to the shelter last night made me realize the stories we write on campus are petty,” she said the next day. “I want to cover homelessness in Oklahoma.” 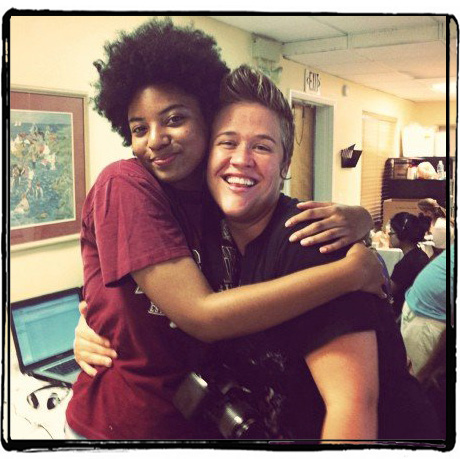 Over the past couple days, I’ve received emails from several WWFF11 alumni that echo Summars’ experience – and one that contradicts it…

1. “This program was what we all needed: a reminder that we’re in this industry for good and are willing to do anything to kick ass at journalism.”

2. “The whole ordeal, no matter how chaotic and stressful, was amazing. I had a blast, and I definitely feel like a stronger reporter and better person because of it.”

3. “Thanks for keeping it real. It’s hard to find people willing to be straightforward with us because they don’t think we can handle the truth.”

After 36 hours at the homeless shelter being surrounded by extremely talented journalists, I’ve come to the conclusion that what I did this weekend isn’t what I want to do for the rest of my life. But I mean that in the best way possible. Because now I know myself 10 times better than I did before the program – I really wanted you to know that WWFF did make a difference to me in a way I didn’t expect.

That’s fine with me, because Will Write for Food isn’t just about journalism. We accepted applicants we know won’t seek mainstream media jobs after they graduate.

One of the WWFF11 graphic designers wants to be an animator. One of the reporters wants to be a stay-at-home mom. And none of the photographers seem really sure what they want do with their lives – as long as it involves looking through a viewfinder.

But what they’ll take from WWFF11 is an opinion on homelessness based on personal experience, not something romanticized or demonized by those with agendas.

They’ve also discovered how much they can achieve in a little sliver of time. Previous WWFF alum have told me that when they returned home, no deadline problem at their campus newspaper – or anywhere – ever again overwhelmed them. I expect to hear the same from this year’s staff.

I believe the best students want to be challenged, not coddled. They want more adventure and less lecture. They want to test their endurance, not endure tests. Alas, not many adults agree.

Every year, I struggle to scrape together the money for another brutal Labor Day weekend. (It’s not just the students who suffer. The last four WWFFers stumbled out of the newsroom at 5:35 Monday morning, and I stayed to shut off the lights – and prove I’m not old. I still haven’t recuperated.)

The Florida College Press Association, the Society of Professional Journalists South Florida chapter, and a couple regional SPJ directors have always donated the maximum they could afford. But other grant agencies look at WWFF in horror.

They believe college journalists are too fragile for this. And most probably are. But what about the exceptional ones? What about students with the minds of muckrakers and spines of steel?

I don’t think they should be held back by their fellow j-schoolers whose most incisive interview question is, “Will this be on the test?”

But what do I know.

Anyway, click on the cover below to see PDFs of the 20-page issue 20 students produced in 36 hours…

…and check out the students’ website, as well as SPJ’s live coverage of their efforts. Finally, here’s a videographer’s take…

Leave a Reply to A concerned journalism professor Cancel reply