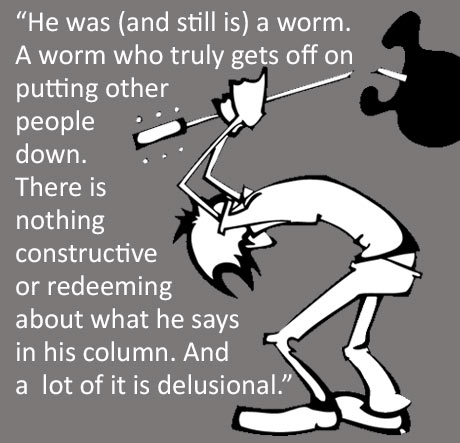 I’m also “a worm who truly gets off on putting other people down.” Why? Because on Sunday, I wrote about my experiences covering South Florida’s local arts scene in the mid-’90s.

Check it out. Maybe you agree I’m an “awful writer” and a “sociopath” with “grimy fingers” who needs to “fuck off.”

All those quotes are from one angry local musician with a reputation for bullying. But when Adam Matza wrote a 22-paragraph response on Facebook – longer than my original post – other local musicians agreed with him.

Some of those artists are talented: Rob Elba, Brian Franklin, and Robbie Gennett, among them. But they’re also thin-skinned.

I’m not offended by the insults. (I actually liked the imagery of “tiny insect of a human.”) But their hair-trigger personal attacks on many others have stunted the South Florida music scene for more than two decades.

Here’s how and why…

Musicians endure critics the way we all endure going to the dentist: It’s uncomfortable, but someone has to scrape away the plaque. Or rot sets in.

Here in South Florida, many of the scene’s now-middle-aged musicians don’t endure critics at all. Unlike their more professional peers in other places, they go thermonuclear over every sentence that isn’t effusive praise.

That’s a shame, because few of us can hone our crafts without objective feedback. Hell, even writers have editors.

This might explain why many local musicians from the ’90s are still creating similar work today. They yell over any critique and learn nothing.

(Matza, in a reply to another local musician, wrote, “My writing is untouchable.” I’ve interviewed artists ranging from Bo Diddley to Anthony Kiedis, and they’ve all been much harder on themselves than that. And of course, much more successful.)

I can’t take credit for this observation, by the way. For years, I interviewed casual customers of South Florida’s music scene, and when I asked if they’d keep coming back, they said no. They said it was like paying to see the same movie over and over.

That might partly explain why live-music attendance is way down from its brief heyday in the mid-’90s, when Marilyn Manson emerged from the local scene as South Florida’s most notable rock star.

2. They keep it a clique

I’ve also interviewed local musicians who have toiled outside the cliques that control the few remaining local venues. They’ve all used that word – “clique” – to describe how aloof and unsocial these gatekeepers are.

Alas, this attitude is now out of proportion to their power.

Back in the mid-’90s, they did indeed control access to large stages. But today, the capacity of every live-music venue in South Florida could fit inside The Edge, the now-defunct, Walmart-sized, two-story nightclub in downtown Fort Lauderdale that booked local shows nearly every week in the mid-’90s.

The local music scene can’t possibly grow again if those who run it now are so hyper-sensitive and incestuous.

They deny both charges, of course, but they do so by posting their objections on each other’s Facebook accounts. They don’t seem to understand the small crowds at their shows is a direct result of their cliquishness – and not the public’s sudden lack of appreciation for quality entertainment.

3. They think everyone else wants to be them

Nothing I’ve written here, as harsh as it might be, is a personal attack. I’ve enjoyed local music for years and plan to do so again this coming weekend.

I haven’t called anyone a worm or an insect or a sociopath. But I expect more “fuck off, dude” in just a few minutes.

I’ll never know for sure, though, because Matza and others have locked me out of their social media. But before they did, I read their theories that I’m simply jealous of their success – “a dick who never really made himself a part of the scene,” as Matza wrote.

Of course, as a journalist, I had no interest in joining their scene – because I was covering it. That’s what journalists do, and that’s how they do it.

So I have no ulterior motive here, no agenda. I have no scores to settle, because I never got in the game. This is one outsider’s analysis of a suffering, shrinking scene that’s loaded with both talent and baggage.

The good news is, when you’re your own worst enemy, it’s easy to emerge victorious. Just stop fighting with yourself.

And you don’t have to fight me, either, because I’m not your enemy. I’m actually one of your customers. I’m just not one of your groupies.