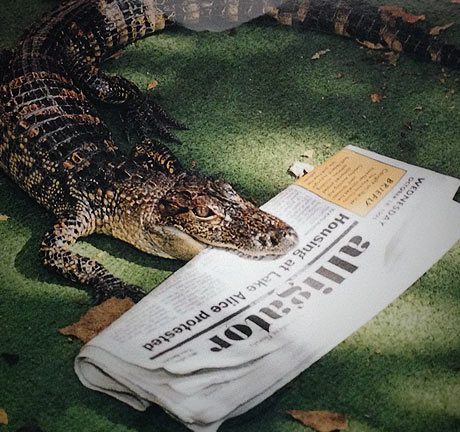 This will make little sense, and be of little interest, to anyone who didn’t work at the nation’s largest student newspaper…

Alas, those were the good old days.

Says Trish Carey, The Alligator’s general manager, “I cannot tell you how many sleepless nights I have spent – and probably will spend in the future – thinking about the loss of revenue and what we could do.”

Here’s what The Alligator did do: Sell its building on West University Avenue. I’ve asked Carey how much The Alligator got paid for the property but have yet to hear back. Whatever the amount, it won’t last long with six-figure annual deficits.

One unreported reason for the sale was a change in Florida’s property tax laws, says Jean Chance, the retired UF journalism professor who chairs The Alligator’s board of directors…

About a year-and-a-half ago, we got a notice from the property appraiser, and he was beginning to look at a lot of the not-for-profits – because apparently, the Florida Legislature changed some definitions, and we were no longer going to qualify for a property tax exemption.

For example, one of the requirements for keeping our 501(c)(3) status was that we’d have to have a physical classroom structure set aside – which is crazy, we’re a newspaper. We might have breezed past this year, but looking down the road, it looked very, very shaky that we’d keep the exemption. That would be a $25,000 bill.

Chance concluded: “If we had another $25,000 to add to the expense ledger, we would’ve been cooked.”

In other words, The Alligator’s budget is so fragile, the cost of buying one Honda Accord would force it out of business.

So selling the building wasn’t just about a windfall that’ll hopefully last long enough for Carey and Chance to rebuild revenue. It was also a survival tactic. Both women are well aware the windfall won’t last.

“No, it’s not all solved at all,” Chance says. “This the first step, but it’s a very big first step.”

Weirdly, that building was supposed to keep The Alligator afloat by renting out the second floor. But Chance says, “The building was constructed in 1929, and it was probably in rickety shape even then. I know there were plans to do renovation, but the building was in such poor shape, it wasn’t economically feasible.”

When Ed Barber retired as general manager in 2007 after three decades on the job, Chance says, “Part of his retirement agreement was he would be the fundraiser to develop an alumni support group, and he just hasn’t the health to do that.”

That leaves ad revenue, which Carey says has plunged for three reasons. The first two are obvious and not unique.

First, “Now there are many more choices to get your message out and most people think that online is the best,” she says.

Second, “We lost almost all of our classified revenue due to Craig’s List and social media.”

The third reason is more interesting…

The landscape of Gainesville has obviously changed, with a great deal of the mom-and-pops – our bread and butter – going out of business and being edged out by the bigger corporate stores.

The decision to purchase advertising was made by the local business owner and now is being made by somebody in corporate that does not know what The Alligator is all about and how effective an advertising vehicle it is.

Anyone who knows Chance and Carey knows this: You could waterboard them for a decade in Guantanamo Bay before they’d admit defeat.

“We are a pretty tough group who will not give up,” Carey says. When I asked Chance about worst-case scenarios, she interrupted me with, “That’s not gonna happen.”

Still, force of will can conquer force of nature for only so long. Carey herself is an example of The Alligator’s precariousness. Since replacing Barber almost a decade ago, “She’s really doing two jobs,” Chance says. “She’s also de facto the advertising director.”

So what happens if Carey gets run over by a beer truck?

In fact, she’s still recovering from spinal surgery earlier this month. When I spoke to Chance shortly after that surgery, she seemed a combination of concerned, unsurprised, and grateful that Carey kept on working while literally on her back.

While Carey tries to figure out how to sell more ads, Chance is getting serious about an idea that’s half-heartedly been kicked around for decades: Start a proper Alligator alumni association that can donate money and buy time.

“Even if it’s just at Homecoming, we need some kind of event to connect the alumni with what’s going on” – although she realizes this isn’t the ideal time to hit up journalists for money. “The reality of life is there are folks are struggling out there.”

1. Forget the journalists, hit up the ad reps. The Alligator needs an alumni association for the students who not only made money selling ads, but definitely earn more now than their newsroom peers do.

…and I’m sure smarter Alligatoroids than me can come up with much more profitable ideas. But hitting up journalists is definitely not the answer.

Once Trish Carey retires, The Alligator is, in Chance’s parlance, “cooked.”

It’s not journalism that keeps The Alligator going. It was Ed Barber and now Trish Carey caring as much about the number-crunching as we cared about the writing and photography.

What are the odds The Alligator finds such a devoted GM three times in a row? The most shocking stat on The Alligator’s 990s is one I won’t share with you: Trish Carey’s compensation. Look it up, it’s pathetic.

I’m 51 years old. It’s even money I die before The Alligator does.